Absinth Wormwood is a member of the Sunflower Family, most often found in dry soil, overgrazed pastures and rangeland, wastelands, and roadsides. It is a relative newcomer to Colorado, and, with the exception of one mountain area, there are very few acres infested. Absinth has, however, been identified in Weld County along Willow Creek; far removed from any of the other Colorado sites.

Flower stalks appear at each upper leaf node and produce numerous flower heads, 1/8-inch diameter, which appear from late June to mid-August. Each flower head has many small inconspicuous yellow flowers and each fruit contains one seed (which is less than 1/16-inch long.) These small seeds are easily dispersed by wind, water, animals, and hay. Absinth is a prolific seed producer and seed soil longevity is estimated at 10 years. Seedlings may emerge anytime soil moisture is available, and may go unnoticed for some time as the seedling produces several small leaves close to the soil surface before bolting. 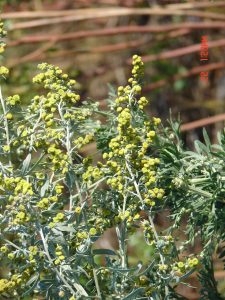 Proper grazing management and rotational grazing are among the best preventative measures to maintain a healthy ecosystem.  Absinth Wormwood out-competes native species, resulting in reduced forage availability and habitat degradation once established. Milk from cattle that have grazed absinth is strongly flavored and rejected for consumption. Absinth Wormwood has poor palatability for horses and cattle who tend not to eat it, however sheep and goats will graze on it.

For more information on control options and identification visit www.weldweeds.org or call 970-400-3770.